A sobering surprise put Emily Beater’s social life on hold and gave her a different reason to feel queasy in lectures. She reveals the stigma of being a student mum and how she mixed studies with sleepless nights

I found out I was pregnant aged 19 during freshers’ week at Oxford University, in one of the communal bathrooms in my college. When my pregnancy test showed positive, I couldn’t believe it. One year later, I found myself back in the very same bathroom – this time, to change my baby daughter’s nappy.

I’d always wanted to go to Oxford and was delighted to be accepted to study English literature, after a secondary education at an all-girls Catholic boarding school. My mum dropped me off on the first day, and I remember her fussing over my printer and belongings before she finally left. I didn’t want her to go. I was excited but nervous. I was leaving behind my boyfriend, Jon, who I’d met in Surrey when I was 17 and he was 19.

I’d never been in love before Jon. I thought a lot of guys his age were trying to fulfil a certain stereotype of masculinity, but Jon wasn’t like that, he was just really kind. He stayed back at home, working as a catering assistant and living with his mum while I studied.

We made a misstep with contraception. I must have got pregnant right before I left for university, but I hadn’t realised until that startling moment in the bathroom in freshers’ week, not long after it had dawned on me that I hadn’t had my period. Looking back, I can see there were other signs too, such as being constantly, bizarrely thirsty.

I called Jon after I found out, on the phone from halls. He was shocked, but he reassured me everything would be OK. So while all the undergraduates around me were throwing themselves into the usual freshers’ week antics – getting drunk, attending their first lectures – I was wrapping my head around the news of my pregnancy. I stayed in my college room a lot, wondering what to do.

First, I told my college tutor I was pregnant. She was brilliant and advised me not to have an abortion unless I really wanted one. Of course, there was plenty of support if I did decide to go down that route, as there are options such as Abortion Counseling in Jackson, MS, as I know now. But back then, I was dependent on the advice of my tutor. If I wasn’t OK with it now, she said, I probably wouldn’t be down the line. She gave me hope. Keeping my child suddenly felt like a viable option. The other option that there was to consider was obviously adoption and with lots of great agencies like Heart of Adoptions for adoption in Florida, I can see why some mothers would choose to go down this route for their unborn child. But for me, I was always drawn more to the idea of keeping my baby.

Though I was alone a lot, I did manage to make some friends. A few of them thought I was joking when I said I was pregnant. There are no social guidelines on how you deliver that sort of information. I was in love and Jon was supportive, so I wanted to make a joyful announcement, but that felt strange, given the circumstances. I was also worried about stressing my family out. My mum and dad were really good about it. I remember telling Mum over the phone that I was pregnant and she said: “I love you. We’ll deal with it.” I was most nervous about telling my grandparents. 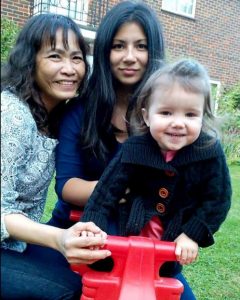 Aged 22 with her aunt and Beth, 2, before starting her final year this month

After working so hard, I was determined not to let the opportunity go. I didn’t think I’d get thrown off the course, but I had no idea how undergraduates with children coped. There was virtually no advice online and zero success stories I could track down. As far as I knew, people had kids in their thirties, once they were established, married and had money. None of that applied to me and Jon. At our antenatal classes, we were the youngest couple by miles. Jon’s mum was particularly good about it all because she had a child at 20, so she understood.

I had bad morning sickness and would sleep all day, doing essays at night

In a strange way being pregnant boosted my confidence. I had been terrified of failing to live up to Oxford’s academic standards, yet as I embarked on my first term as a pregnant undergrad – the only one in my year, of course – it felt as though my body was achieving something, and that was unexpectedly empowering. Studying while I was pregnant was hard, though. I had bad morning sickness and would sleep nearly all day, doing essays at night. I often felt too ill to go to lectures and that made me panic about my work. I just wanted to get the pregnancy over with – to prove to everyone I could get through the university year.

Eventually, it became too much. After my first term, I decided to leave until I had given birth, then start my degree anew. I moved to my mum’s house, which was quite strange, being back in my teenage bedroom. I was really tired and sick, though, so I just concentrated on getting through it, on surviving. Meanwhile, Jon was living with his mum nearby.

Beth arrived in June 2015. The labour lasted more than 30 hours and was traumatic. I was in agony and I got the impression the nurses thought I was young and silly. One of them told me she would give me an epidural on the condition that I stopped screaming.

When you give birth there is pressure to be gripped by a sudden outpouring of love towards the baby you cradle in your arms. As I stared down at Beth, I felt numb, though amazed she was real.

Three months afterwards, I returned to Oxford to start my first year a second time. Jon got a job near the university as a medical records officer. That was two years ago and we now live in a one-bedroom flat at the university. Student Finance England offers a generous childcare grant to undergraduate parents. Thanks to that and Jon’s income, we get by. I’ve just started the third year and things are going well, though balancing everything is still tricky.

Attitudes to young pregnancy have a long way to go. It’s still associated with failure and the notion that you’ve ruined your life. That weighed heavily on me at first. People didn’t often congratulate me – they asked me how it had happened, aghast.

I’ve given up trying to be both the perfect student and the perfect mother: I just do my best. Beth started nursery at three months old, which raised eyebrows, but there was little choice – childcare is expensive and I didn’t want to abandon my degree. Her nursery is attached to the university and I am the only undergrad mum. Many of the other parents are professors, who drop off their kids looking smart and put-together. I pitch up in a hoodie having barely slept, with Beth in my arms.

Before my pregnancy, I felt invisible. Once I had my daughter, I felt all too visible. People don’t expect young ladies like me to have a child. It’s unfair because, actually, there are advantages to having a baby when I did. I’ve got the energy to play with her, for one thing.

Beth is two now. Occasionally, I’ve had to ask for extensions to essay deadlines. Professors are good about it, but the university isn’t structured to function around parents who can’t devote themselves to endless silent library sessions. When I was breastfeeding I would try to read huge tomes over Beth’s head. She could tell I wasn’t concentrating on her so she would swipe at the books with her hands.

Now and then I try to go out with my uni friends. I’ll organise childcare and make sure I’m home by 10pm. I’m aware of how different my university experience has been to other students’, but I don’t regret having Beth when I did. She’s easily the best thing that’s ever happened to me. Though I’ve gone through a lot, I’ve learnt truths about life early on. Among them, the fact that you can definitely be a young mother and achieve things.