Miscommunication in any relationship can happen at any time, and to any couple. As human beings, we all argue and have many a heated discussion from time to time, and that fact is no different when it comes to couples in a relationship. Whilst a small proportion of arguing in a relationship is normal, and in all honesty inevitable, it is the speed with which the conflict is resolved which determines just how happy a couple will remain in the aftermath of an argument.

When I was training to be a psychologist, I began to see a pattern emerging when I studied the case of a married couple who were using marriage guidance to help them with their fraught relationship. The couple, Robert and Clara, had been together for almost a decade, but very slowly the cracks were beginning to form in their relationship – with neither one of them truly understanding the root of the problem. Growing apart, the two were beginning to lead separate lives and ready to call time on their union if they couldn’t find the answers. Fortunately, it didn’t take long for the psychologist leading the guidance to get to the bottom of the problem; Robert and Clara were experiencing what psychologists refer to as going down the middle. 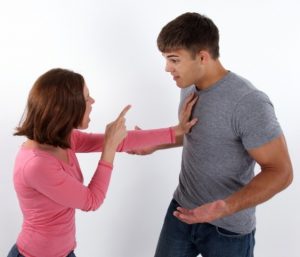 When couples have an opportunity to make both sides of their cases heard, they often still can’t hear what the other one is saying, despite allowing the other to talk. But, when amidst arguing, we all fail to see the other person’s point of view because we are all so pent-up with emotions – and this is where the problem begins. Furthermore, when we refuse to talk about the incident afterwards, or we do but not properly addressing the root cause of what started the argument off in the first place, we then allow the hurt to reside. The tension then grows to some what epic proportions as each partner silently fumes for many hours afterwards. Yet, if this situation is left to linger for a longer period, and subsequent arguments also resort in the same scenario, we then have a bigger problem that is beginning to build to dangerous proportions.

Robert and Clara’s issues began as minor niggles, but by not acknowledging them when they started, they felt as if they were running out of options. One session revealed that Robert had stood outside their home chatting to a neighbour early one morning, leaving Clara to deal with carrying out some heavy bags which they had packed for a short trip away together. Biding her time, Clara waited inside the house, seething with being left with it all, until she could bear it no longer and ended up ringing him in front of their neighbour. Not thinking about how distressed Clara was at the thought of being left to deal with their bags, Robert was enraged at being made to look like what he described as a naughty school boy in front of a respected neighbour. Their car joinery was subsequently one of the quietest the pair had ever experienced since getting married!

I watched with awe as the psychologist taught them how to learn to repair, which was the next stage that would have been more effective after their disagreement. Clara was asked why she had got so angry, and she replied that the sheer lack of effort on Robert’s part had made her feel upset. Robert retorted immediately by throwing his hands in the air and saying not once had Clara asked him to take the bags to the car. It soon became obvious that both were competing against the other, with only room for one winner available, but neither obtaining first prize! I watched and waited as the heated debate died down, and the psychologist simply asked them why they were in competition with one another. This caused two blank faces – until they realised what they had both been doing. Had they both had worked together, and solved the disagreement before it escalated, they could have initiated a better beginning to their romantic break for them both! 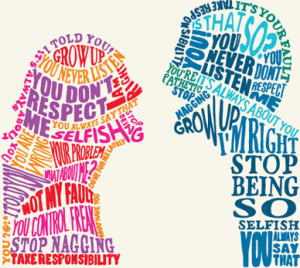 Subconsciously, when we are in a relationship with someone, we will always be questioning their commitment to us and whether they respect us and want us for who we are? Although these questions may remain unspoken, that doesn’t mean to say that they are never far from the surface. When either person feels as though there is doubt to the answers of such questions, the brain encourages a surge of irrational thoughts which unfortunately rears its head in our arguments, as we attack whilst our partner struggles to defend themselves, and they in turn lash out in pure surprise to this unplanned attack!

With Clara, she admitted to feeling hurt at Robert’s treatment of her, as she felt her needs were of little importance to him. By admitting her reasons to Robert, Clara could begin to repair the situation, letting Robert know exactly how vulnerable she was feeling, so he could begin to work on eliminating this anxiety by offering her reassurance that ignoring her was most certainly not his intention.

As human beings, we all thrive on being understood and being dealt an amount of empathy from those that we love the most. By learning to show compassion after an argument, however difficult it feels at the time, you limit the impact when the argument takes hold.

That’s not to say that this is a process that happens immediately and sees instant results. Like everything in life, these things should be worked at. The difference being here though, is that in a relationship, it is worth the time and effort practising to get it right as soon as possible. By processing what went down in an argument, couples can effectively work at making their quarrels with one another better, because as I said at the very beginning, arguing is a common factor in any healthy relationship; but it’s the ability to repair and move on which remains the deciding factor of a relationships future success. Ultimately, you work at repairing the little things, so they simply cannot escalate into the bigger things.