Dr Renee Engeln once shared with her female students this famous survey statistic from Esquire magazine: “Fifty-four per cent of women would rather be hit by a truck than be fat.” She asked the class what they thought. Far from being dismayed, incredulous and scathing, they had questions. How big was the truck? How fast was it going? What kind of truck was it? How much would it hurt? So embedded are society’s body shaming canons that intelligent, educated young women were weighing up pain and injury against the terrible fate of being fat.

Engeln, a professor of psychology at Northwestern University, Illinois, says it is a reaction she hears “over and over again”. There is a reason so many girls and women struggle to feel comfortable in their own skin, constantly fretting that they are insufficiently thin or beautiful. They are not a “vanity-struck minority”, she says, they are “our daughters, our sisters, our friends and our loved ones. They are our future leaders.” They are, she says, “beauty sick”.

I’m sure most of us are familiar with the symptoms of beauty sickness. They can be found in a world where women have holes surgically bored into their face because dimples are deemed to be pretty. Where they get lipsuction for “cankles” (thicker-than-desired ankles). Where having a “thigh gap”, something no one had heard of 20 years ago, but which means being skinny enough that your thighs don’t touch at the top, now seems a basic requirement on social media. Where the satirical website The Onion once ran a spoof article about a beauty industry initiative to make women feel self-conscious about a new body part — the palms of their hands — and people believed it was real. 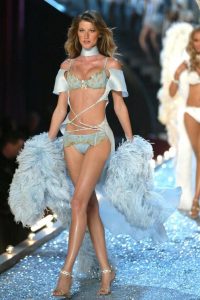 Beauty Sick is the title of Engeln’s new book, which has more than 350 pages of exhaustive research, interviews and analysis into the set of contradictions that inform the reality of millions of women’s lives. As she says, they are angry about the media’s treatment of women, yet “hungrily consume” the very outlets that belittle them. They don’t want to be like Barbie dolls, but feel that they must look like them all the same. They mock modern culture’s photoshopping and airbrushing tricks, but still pose with the tilted head and “skinny arm” (hand on hip, elbow jutting out so it looks thinner) for every photo.

Photographers have long known this trick and Engeln believes it’s evidence of the celebrity paparazzi culture “trickling down” into everyday life. “I don’t think it was a big deal before because pictures weren’t such a big deal before,” she says. “You didn’t have to know so much about posing. You couldn’t take [the photo] over and over again so no one’s pictures were expected to be perfect.”

One of the most striking assertions in Engeln’s book is this: research has shown that even when photos of super-thin models carry disclaimers such as “Warning: this image has been digitally altered” (ie it’s fake) it makes no difference to how women feel about them. In fact some studies show such disclaimers can increase women’s drive to be thin and reduce their body satisfaction.

Why on earth would that be? Engeln explains that a strange rationale is taking place. People say: “If it says the thighs have been photoshopped it draws my attention to the thighs and then I think, ‘Well, if they bothered to photoshop them that way that must be what looks good.’ ” So even though we know the game is rigged against us, we still play it.

Engeln says: “We process visual stimuli very quickly and then that part of the brain that says, ‘I don’t think women need to look like that, that’s not realistic’ — that comes afterwards.” Research participants argued that the image will always be more powerful than the words that accompany it — something that advertisers know well and use to huge effect.

The influences on our body image don’t just come from celebrities and advertisements; they are closer to home too. Just last week Nicky Hutchinson, a former teacher who advises schools on ways of supporting children with body confidence anxieties, told The Times that children as young as three are becoming worried about their looks after watching their parents trying to make themselves look perfect in selfies. “There is a culture now among parents of not just taking selfies, but altering them first or taking ten to get the best shot,” Hutchinson said. “Little ones are picking up on this anxiety about looks and growing up in a society where we are almost giving the message that what you look like is the most important thing about you.”

It’s a cycle that clearly needs to be broken — but how?

“All the young women I teach know better, but they still can’t totally shake this stuff off,” Engeln says. “They still have to live in a world that they feel is holding them to this standard.” Even more disheartening is that it seems things don’t always improve with age. The “fat talk” in which younger women engage (“My legs are too fat. They’re fatter than yours”) is often replaced by “old talk” (“I have way more wrinkles than you”). And, jaw-droppingly, research showed that 50 per cent of 18 to 29-year-olds were already engaging in old talk.

Self-objectification is common. Over time the awareness that others are constantly judging your looks becomes internalised and you start doing it for them: you become a constant surveyor of your body, asking yourself, “Is my stomach pulled in?” rather than, say, “What can I learn today?” A college student named Lily Myers won an award for her account of her chronic body monitoring. “I don’t know the requirements for the sociology major,” she said, “because I spent the entire meeting deciding whether or not I could have another piece of pizza.”

Engeln knows from personal experience that women are judged way more on their looks/size/dress than men are. At the age of 24 as a graduate student instructor, for instance, she read the feedback to her lectures. One (from a young man) said: “You should wear that blue skirt more often. It looks good.” This in a class entitled “The Psychology of Gender”.

She thought back to the corduroy skirt she wore with tights and boots and it unsettled her that someone had been more interested in her legs than what she was teaching. Colleagues told her to brush it off as a compliment, but she felt that he might as well have written: “I respect you so little as a professor that I won’t even address your teaching, I’ll just make a reference to your wardrobe and body shape.”

Indeed, we had a national version of this via the Daily Mail’s recent “Never mind Brexit, who won Legs-it!” headline, which “jokily” invited readers to consider who had “the better pins” — Theresa May or Nicola Sturgeon — and not what they had discussed about leaving the EU. Engeln has used that front page in slideshows to illustrate her point.

“It might be a joke if it wasn’t happening all the time in real life,” she says. Women can be too unattractive to be listened to or too sexy to be taken seriously. “I don’t know where that middle ground is or whether any woman has successfully found it.”

And yet one uncomfortable fact is that the people who buy those magazines that shame female celebrities for having cellulite or a muffin top are overwhelmingly women. What’s that about? Some weird kind of masochism? “When you put women into basically a beauty pageant with each other it’s hard not to want to see other women losing,” she says. “You didn’t sign up for the beauty pageant, so of course you may get a little schadenfreude when a celebrity looks less than perfect.”

A fascinating part of the book is an experiment by several young women who responded to unsolicited body compliments from men on Twitter and Reddit by politely agreeing with them. When one man told an 18-year-old, “You’re really beautiful”, she said, “Thank you. I know.” His reaction was to call her a bitch and tell her that being vain would get her nowhere.

Engeln says it was incredible how quickly men turned. “A lot of appearance compliments from men to women are actually more about power than about any type of generosity or kindness,” she says.

So what sort of response do they want? “I think you’re supposed to say, ‘Oh thank you, no I’m not. I’m average. That was just a good picture.’ I think our culture does not like women who like their body.”

Such reactions illustrate another of society’s mixed messages to women: “Love your body! (But not too much)”; “Feel proud of who you are! (But keep quiet about it)”. If a woman is body-confident she is probably seen as arrogant. Hence how bad women are at accepting compliments.

However, Engeln does propose ways that we can all change the beauty-sick culture. We can stop the body and looks talk, for a start; we could stop telling women they are beautiful. “If your goal is to help women feel more confident and engage more meaningfully with the world,” says the book, “telling them they are beautiful is not the way to do it.

“I’m not saying you should never do it and if we lived in a different type of culture I wouldn’t think it mattered at all. It’s that we do it so often. Every time there’s a subtle message that this is what’s important. We do it so much more to women than men. I was on a news show last night and three different people commented on my outfit. When men come in to be interviewed you don’t hear [other] men say, ‘I like that tie.’ ”

That the aforementioned Esquire statistic is from 1994 tells us how long beauty sickness has been infecting society. Engeln says the sacrifices we make to the ideal with our time, our money, that one more starvation cleanse to lose 10lb before an event, are injurious. In small ways we are “being hit by that truck all the time”.